Solent Fuchsia Club has used quite a few venues in which to hold their annual shows. These range from the very first one that was held in 1974 in a large greenhouse at Hammond’s Nursery, Stubbington. Our next shows (1975 – 1977) were at the Community Centre in Queens Road, Fareham. From 1978 until 1981 Holy Trinity Church Hall was used and in 1982 – 2002 we had the privilege to book the ‘posh’ surroundings of Ferneham Hall in Osborn Road, Fareham. For one year only (2003), we were at Crofton Community Centre. The following year we used the Titchfield Community Centre and continued there until 2011. Unfortunately, we became aware of the disease Fuchsia Gall Mite in 2012, so naturally we cancelled our show for that year. Catisfield Memorial Hall has become our venue since 2013. 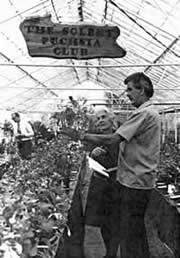 The photo (left) shows Ted and Eileen Saunders judging Solent Fuchsia Club’s very first Annual Show in 1974. The venue belonged to Hammonds Nursery at Stubbington, near Fareham. On the far left of the picture is Ted Adams, one of the founder members of the Club. 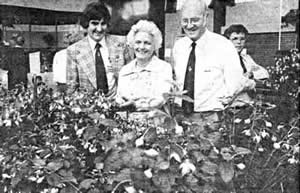 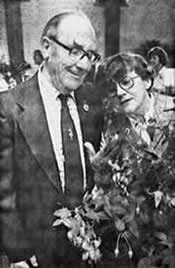 This photograph was taken at Solent Fuchsia Club’s Annual Show in 1980. It shows Reg and Ruth Witts just after judging the twenty seven classes of good quality plants at the Holy Trinity Church Hall in Fareham.

They were a lovely couple and gave magnificent support to Sid Ellis in his first ever role as Show Secretary. For him, it proved to be a most enjoyable experience, and because of this, his job was made a lot easier than he had envisaged. 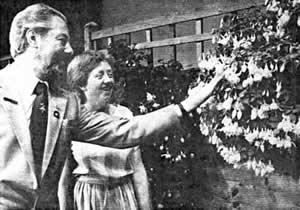 This photo was taken in 1986. It illustrates Carol Gubler who was invited to judge the Show. She is seen here with Bryan Stevens who was the Solent Fuchsia Club’s Chairman at the time. This was her first visit as a judge, the second being in 2002 and then again in 2006. 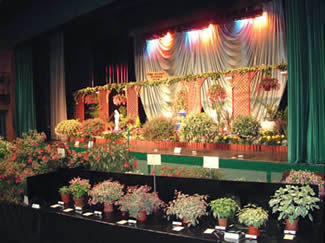 Our 2001 Annual Show was held in the majestic surroundings of Ferneham Hall, Osborn Road, Fareham. All the stage structures were manufactured and assembled by Club members. The judges for that year were Mr G Smith & Mr J Large. 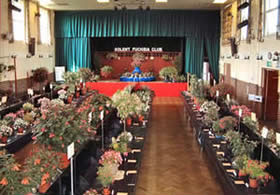 We held our Annual Shows at Titchfield Community Centre from 2004 – 2011. Although smaller than Ferneham Hall, its main benefit was that it had more natural light, which is an advantage when viewing plants, especially fuchsias. The judge in 2004 was Mr R Chislett. 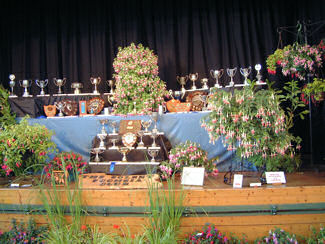 This is a photo of the stage display at our 2008 annual show. A strawberry planter centre stage contains 18 fuchsia plants of the variety ‘London 2000’. The judge for 2008 was Mrs H Blackburn. 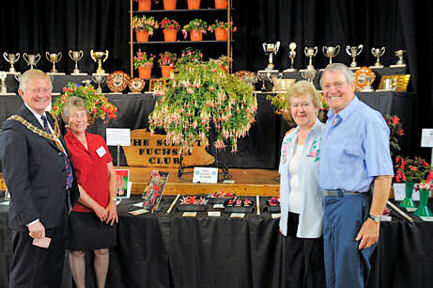 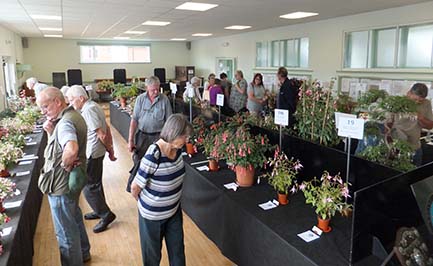 The photo shows members of the public viewing the fuchsias displayed in the Catisfield Memorial Hall. The judge for the show was Derek Luther.