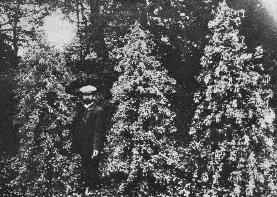 Another fine exponent in the art of cultivating magnificent pyramids was none other than James Lye’s son-in-law, George Bright. He took over when James Lye stopped growing them at the end of the nineteenth century. The photograph shows him standing alongside some of his exhibition plants. Pyramids like this were produced over a period of two years, but their life span was four to five years, after which they started to deteriorate. He also raised several cultivars, his first introduction was in 1910. Among them was ‘Pink Pearl’.