History Of The Fuchsia

Père Charles Plumier, Monk of the Order of Minims, named the plant Fuchsia triphylla flore coccinea after his colleague, Leonhart Fuchs. Since then it has taken many, many years for dedicated hybridizers with infinite patience to improve the quality of blooms, foliage and growing habits of the fuchsia plants we have today.

This is how it all began:-

Records show that the very first description of a fuchsia plant, (fuchsia triphylla flore coccinea) was mentioned by Plumier in Nova Plantarum Americanum Genera in 1703. 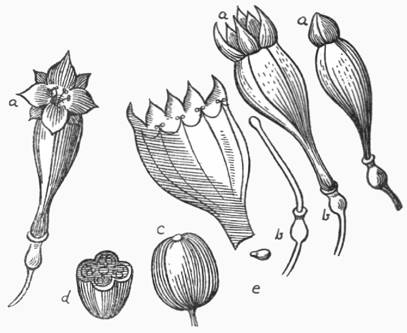 Plumier was in America to study the Quinine tree, and while there he made an extensive collection of new species and genera. His drawing (above) was not very accurate as it only shows four stamens; but it was on this description that Carl Linnaeus based the genus Fuchsia (Fuchsia L. Gen. Pl. ed. 1: 27, 1737).

Although there was considerable confusion as to the place of its origin, triphylla flore coccinea was thought to have been found by Plumier in Columbia, but this was later rectified by Thomas Hogg of New York in 1873, when he sent home seed of this species from San Domingo. The native location of the plant was finally settled.

According to John Coutts, (reference Gardeners’ Chronicle; vol. 87, pages 10 & 11) the first authentic drawing was published in 1725 by R. P. Louis Feuillé in Journal Des Observations Botaniques; vol. III, pl.47 under the name Thiles, which is the native name for the plant in Southern Chile.

An excellent coloured plate of F. triphylla appeared in The Garden for 1892; vol.41, facing page 32, with notes on its cultivation. It also mentions that in 1882, Hendersons, the nurserymen of St. Johns Wood, London, sent a plant to Kew (Hendersons had the originals from America and they were possibly raised from the seed T. Hogg had requested to be sent to New York from Haiti [San Domingo]). These were possibly the first living plants of F. triphylla seen in this country, and Hendersons presented Kew with one.

* There is significant uncertainty as to the actual date when living plants were first cultivated in Europe, but Coutts suggests the date as being somewhere between 1786–1789. At this period, when both magellanica and coccinea were in cultivation, a nurseryman by the name of James Lee was said to have noticed an unusual plant (F. coccinea) growing in the window of a sailor’s house. After a little persuasion, and probably including a somewhat generous payment, he gained possession of the plant. From this he propagated a number of plants (supposedly 200–300) which it is believed, he sold for 10–20 guineas each.

Some believe that the plant F. coccinea, a native of Brazil, was given to Kew by a Captain Firth.

* It was generally believed that James Lee had somehow obtained his plant from elsewhere and his statement referring to the plant in the window was to cover the fact that the plant may have actually come from Kew (the authorities there would have taken a very dim view of this). It may have been true that he obtained the plant from the sailor, but it is also partially true that he didn’t actually get it directly from him or his wife.

Introductions of other species appeared at this period.

With all the new material that was now available, the serious business of hybridizing really began. The first record of this work in 1825 was the crossing of coccinea and macrostemma with arborescens, using the latter as the pollen parent. Unfortunately, the result was never recorded.

Felix Porcher’s Le Fuchsia (4th edition) 1874, suggested that the first hybrid was raised in 1837 and English growers were the first to commence this work. It is recorded in The Garden; volume 9, page 284, that globosa was raised by William H Bunney of Stratford in 1832 by crossing coccinea with microphylla. It must be said that the present day globosa contains very little, if any, microphylla blood.

Coutts mentions in Gardeners’ Chronicle that globosa is a seminal variety of conica; therefore microphylla would have had very little effect in the cross.

To alleviate any unnecessary confusion, the following is an extract taken from A Fuchsia Survey by W.P. Woods:

Globosa is given by Lindley as globosa (Lindl. Bot. Reg. 18; pl.1556), 1833, while Dr Philip Alexander Munz (Professor of Botany, Pomona College, California) states – ‘apparently a plant of horticultural origin. I have seen no wild specimens like it. It apparently has arisen from F. magellanica.’

It therefore seems fairly certain that globosa is a variant of conica and probably arose as a natural mutation. Therefore F. magellanica var. conica var. globosa.

There was also Atkinsoniana (Lowe, 1838) which was claimed to be an improved globosa.

In 1840 A. Normald of Ripon, Yorkshire, raised Normaldii = arborescens x reflexa. Among the highlights of the year was the raising of ‘Venus Victrix’ by Gulliver of Hurstmonceaux. It wasn’t distributed (by Cripps of Tunbridge Wells) before 1842. This latest introduction has a white tube and sepals which are tipped green, with a violet purple corolla (almost pure blue when it first opens). This plant with the first white tube is very free flowering and was used extensively for hybridizing. It claims to have its blood, however diluted, in practically all the white tube varieties raised since.

1841 saw an increase in the number of hybridizers who were sending out new varieties.

The name of R. Youell of Great Yarmouth appears in 1843. During this period, Story produced ‘Queen Victoria’ which has a red tube and sepals with a white corolla. This was one of only two with a white corolla, although he also brought out two others at about the same time. There isn’t any record of the parentage of these varieties; Mr Story had disposed of them to Hendersons of Tollington Nurseries, and unfortunately, Mr Story, after a severe illness, had just passed away. It is stated that he used pollen from a species with an almost white corolla, the flowers of which he obtained from Mr Vietch of Exeter, and that the species died after flowering.

Lucombe and Pince of Exeter also brought out white corolla varieties soon after and it’s possible they also used the same parent (from Vietch) that Story had.

In 1844 there were numerous raisers of new varieties. Among the names of the more prominent are Miller of Ramsgate, C. Epps of Maidstone and G. Smith of Dalston.

Mentioned in the Gardeners’ Chronicle during 1846 is the best white raised so far (‘Acantha’ by M. Dickson). Also, W. Bull of Chelsea is mentioned for the first time in 1846.

Hendersons’ (Edgware Road) catalogue for 1852 mentions a fuchsia by Story named ‘Peculiarity’. This has a short tube and sepals, with deep rose stripes on a dark double corolla, price 7s 6d. Also, there is ‘Pumila’ and the first mention of the universal variety, ‘Riccartonii’.

In the catalogue of Bass and Brown of Sudbury, Suffolk, there is a reference to ‘General Tom Thumb’, and from its description it appears to be the ‘Tom Thumb’ of today. The identities of ‘Tom Thumb’ (1850) and ‘Pumila’ (1852) become rather confusing in later years. Names of new raisers constantly appear. Among them are Edward Banks, S. Wheeler, G. Knight, B. Lee, Coën, Lemoine and Rozain–Bouchariat. In 1855 Banks produced ‘Rose of Castile’.

When Porcher’s last edition was published, several new varieties and raisers were mentioned. During the period 1860 – 1874, Banks was responsible for fifty eight, among them being ‘Rose of Castile Improved’ in 1869.

Edmund Bland commenced raising (1867 – 1882) and included in his contribution of eighty two varieties was ‘Bland’s New Striped’ in 1872.

By 1874 it was stated that Porcher had become more critical in his remarks and selections. One of the plants mentioned is Smith’s ‘Queen Victoria’. It has a long tube of a tender rose, sepals large and green tipped with a grand corolla of a purple carmine, very floriferous and that it excites attention.

The name of James Lye appears in 1871, and he is responsible for numerous varieties of outstanding merit, a large number of which have the Lye hallmark of a rich creamy white tube and sepals of a dense wax–like texture. He continued raising until 1897 (Gardeners’ Chronicle Vol. 22, 1897). In 1929 the R.H.S. granted his plant, ‘Clipper’, a Highly Commended award (this was the third plant to bear this name, the previous two being by Banks & Bland). Some of his other raisings worth a mention: ‘Beauty of Wilts’; ‘James Lye’; ‘Letty Lye’; ‘Betty Lye’; ‘Mrs Lye’; ‘Mrs J. Bright’; ‘Mrs Huntley’; ‘James Huntley’; ‘Charming’; ‘Elegance’; ‘Beauty of Swanley’; ‘Mrs F. Glass’ etc. James Lye produced between fifty and sixty varieties, and some are still in cultivation.

The only English book on fuchsias was published in 1883. It mentions very few varieties but instead concentrates mainly on cultivation and how to grow and train pyramids, standards, conicals and bush plants. It was entitled: A Practical Treatise On Fuchsias by Frederick Buss. A recent edition of this book is still available.

At about this time only one other raiser can be traced. Although Rundle only raised three new varieties, ‘Mrs Rundle’, ‘Mr Rundle’ and ‘Duchess of Edinburgh’, the quality more than made up for the quantity. The first two being reputed seedlings from ‘Earl of Beaconsfield’ (raised by P. Laing in 1878).

Fuchsia popularity declined after the Victorian period and they declined even further during the years of the First World War. The growing of fuchsias and other decorative plants suffered as a result.

It wasn’t until the mid 1950’s that the fuchsia regained its popularity in the UK.

Apart from James Lye, there doesn’t seem to have been any English raiser of note for the remainder of the 19th century. His son–in–law, George Bright, was a worthy follower during the early 1900’s. Among several plants raised by him are the varieties, ‘White Knights Gem’ in 1910 and ‘Pink Pearl’ in 1919.

Fuchsias are one genus of the botanical family Onagraceae, and they are therefore related to other members of the genus such as Godetia and Evening Primrose. Within the fuchsia genus there are over one hundred separate species.

Within these various species of fuchsia there are many cultivars and varieties.

A variety is a naturally occurring plant which is different from others within a species (e.g. Fuchsia regia var. ampliata).

A cultivar is the same, although the plant has been ‘man made’.

The majority of commercially available fuchsias today are cultivars such as ‘Display’ and ‘Riccartonii’.

A Brief History Of Triphyllas

The introduction of triphylla hybrids didn’t appear in any number until the beginning of the twentieth century. These were the plants raised by German hybridizers. The previously attempted crosses with triphylla had not been successful. It was believed that they were triphylla x boliviana, but there isn’t any definite proof of this.

Some of these new hybrids were crossed with fulgens and splendens. One must remember that triphyllas are generally ‘frost shy’. During the summer months however, triphyllas make excellent bedding plants because they are exceptionally floriferous. Among the earliest arrivals were: ‘Andenken an Heinrich Henkel’ (F. Rehnelt) 1902; ‘Traudschen Bonstedt’ (G. Bonstedt) 1905; ‘Göttingen’ (G. Bonstedt) 1905; ‘Koralle’ and ‘Gartenmeister Bonstedt’, both by G. Bonstedt in 1906. Rogers was responsible for ‘Benita’ in 1912. ‘Leverkusen’ (‘Leverhulme’ in England) was introduced by Hartnauer in 1928. The flowers of Leverkusen are axillary. Another plant worth mentioning is ‘Thalia’. It makes an excellent bedding plant, dwarf, with pale orange coloured flowers, borne in terminal racemes as most in this class of fuchsias do.

There is considerable confusion as to when triphyllas were first brought into cultivation in this country. Essig states that it was introduced from Mexico in 1842, but we now know that its native habitat is in Haiti and San Domingo. It is generally accepted that it wasn’t here much before 1882, when Hendersons sent a plant to Kew for identification.